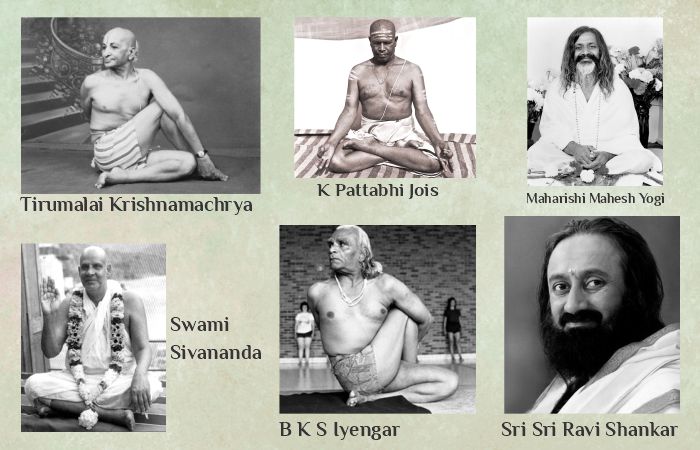 The art of yoga is nearly 5000 years old that has become an intrinsic part of Indian culture. The approach to yoga practice focuses on perfecting physical and mental health. India is the center of attention and attraction when it comes to venerable yoga sages. Some yoga masters are so much indulged in the practice of yoga that they have dedicated their lives to life-long purity and celibacy. Hence, they attain true mastery not just over their bodies but also their minds. Here are a few Indian yoga gurus you must know about.

The following are some of the greatest Indian yoga gurus that have enriched the world of yoga with their presence. Keep reading to enlighten yourself.

Also known as ‘Father of Modern Yoga’, Krishnamacharya is most popularly known for structuring Vinyasa yoga. Further, he also curated the renowned practice of Hatha yoga. Krishnamacharya Ji was a scholar of yoga and Ayurveda.

He blended what he learned from yoga and Ayurveda to have perfect health. He was famously known for his mastery over his heartbeat along with his ability to hold his beat at his will.

Being a doctor by profession, Swami Sivananda Ji was a saint as well. Sivananda was known for his humorous way of dealing with things. Further, he wrote a song that talks about the 18 necessary qualities of a yogi.

He was a teacher of Yoga of Trinity which was formed from the amalgamation of three major forms of yoga. The three major yoga styles are Hatha yoga, Karma yoga, and Master yoga. Thus, he was one of the greatest Indian yoga gurus that lived among us.

One of the disciples of T Krishnamacharya, B K S Iyengar is one of the most important Indian yoga gurus who made yoga popular in foreign lands. He suffered from many diseases and illnesses since his childhood. Hence, he grew up weak, feeble, and with poor immunity. That is where he resorted to practicing yoga.

B K S Iyengar gifted ‘Iyengar yoga’ to the world after he redefined the Yoga Sutras by Patanjali. He was so healthy that he could perform headstand for half an hour at the age of 95.

Note: You can join the best spiritual healing courses in India to dive into the world of yoga.

Most popularly known for his Ashtanga yoga or Ashtanga Vinyasa yoga, K Pattabhi Jois was one of the renowned Indian yoga gurus. His teachings and yoga style were based on Yoga Korunta. Further, he worked with various Hollywood and Bollywood celebrities.

His style of yoga focused more on the physical aspect of the human body. Hence, he was in perfect shape for his whole life.\

Do you know the famous American band Beatles? Well, they got attracted to one of the perfected forms of Transcendental meditation created by Maharishi Mahesh Yogi. He practiced yoga for his whole life and earned the title of ‘maharishi’ in his adulthood.

He was a learned scholar of physics at Allahabad University in 1942. Further, he became a disciple of the Shankaracharya of Jyotimath in the Indian Himalayas.

He was one of the greatest Indian yoga gurus who is popularly known for introducing Kriya yoga to the western world. Further, he practiced yoga to unite with the infinite. Yogananda Ji wrote a spiritual book named Autobiography of a Yogi.

He united every soul with his teachings of unity of all true religions. Moreover, Yogananda Ji worked towards the alignment of mind and body with the spiritual realm.

Read More – Top 5 Poses Of Yoga For Upper Back Pain

One of the renowned Indian yoga gurus, Sri Sri Ravi Shankar founded The Art of Living. Further, he popularized the deep breathing practice in which you breathe at a rhythmic pace. It is called Sudarshan Kriya. He practiced a 10-day long silent fast by the banks of the Bhadra river in Karnataka when the idea of Sudarshan Kriya came.

The above-mentioned is a glimpse of some of the best Indian yoga gurus. The list is never-ending. You can form an idea of how rich is the land of India in yoga teachings and spiritual energy. Make sure you visit India to experience first-hand knowledge of yoga and learn to live an easy-going life.

Sign up for our Yoga Newsletter to receive updates on yoga news, expert tips, in-depth articles, giveaways, inspiration & more! We send out 2-3 emails per month and keep our list 100% private and spam free.